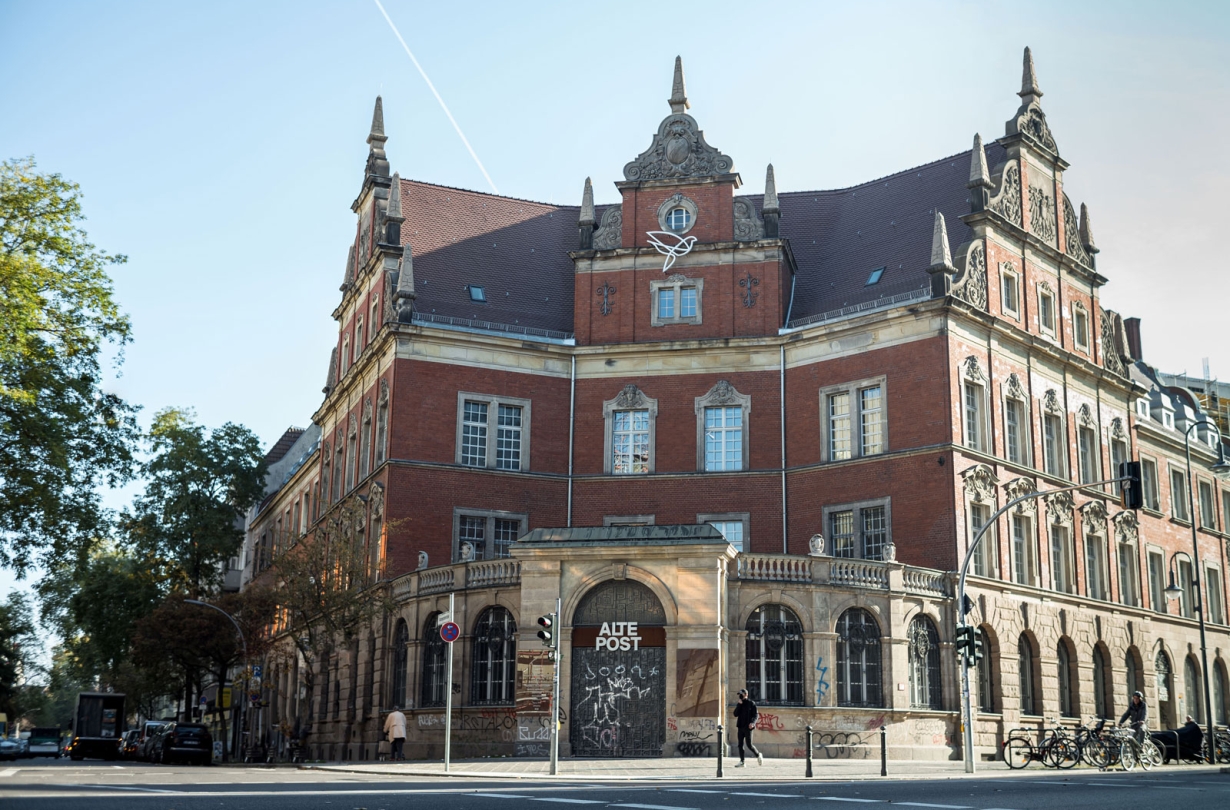 Imagine a typical workday in Germany, say a Wednesday morning in Berlin. Most of the city is congested with never-ending lines of cars, bumper to bumper, moving at snail’s pace from the suburbs into the Spree metropolis and creating an agonizing chaos of infuriating traffic jams and frustrated commuters. Meanwhile, the staff of the Zukunftsinstitut are relaxed and in great spirits as they arrive at their offices on Am Humboldthain – or rather at the building’s bicycle garage and the Rent-A-Bike station around the corner.

While half of the finance team is sampling the latest fair-trade roast in the coffee bar, the new Head of Compliance hits the gym on the first floor for a quick pre-work run before the 9:30 a.m. team meeting in the roof garden. Research Analyst Tom’s mind is already on dinner – he’ll check out the new Bangkok Street Bar in the building’s courtyard with his buddy Andy. During his lunch break he’ll quickly pick up his shirts from the dry cleaner’s around the corner and drop them off at home – little more than a stone’s throw from the office. Time is a little tight today: at around noon, he is to pick up the visiting scholar from Cambridge – who’s flying into BER in the morning – at the nearby train station.

The city of the 21st century:
Communicative, green and diverse 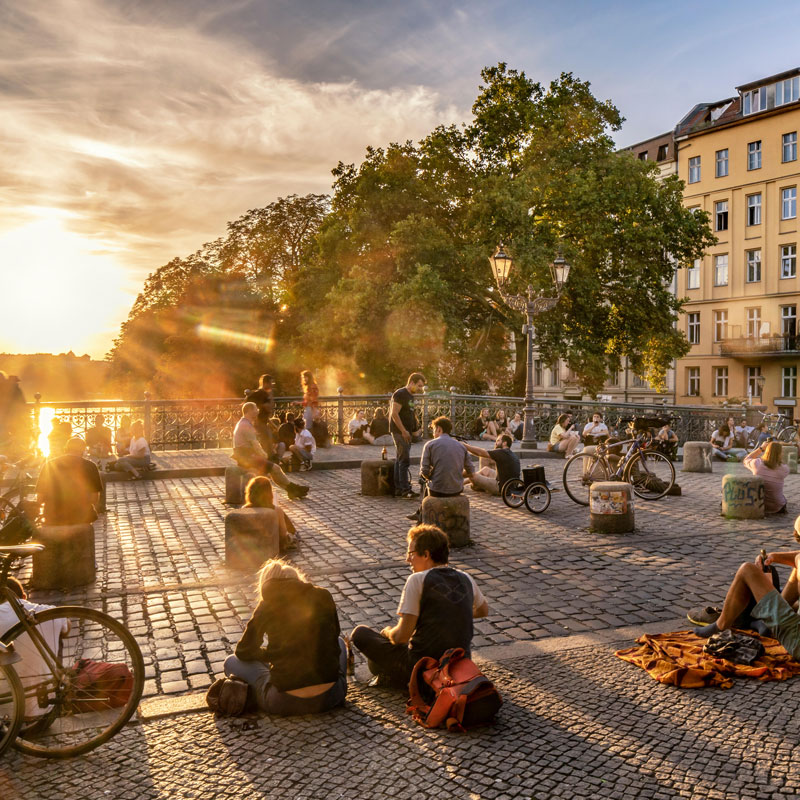 This, or something very much like this, is how we envision the metropolis of the future: an increased density and meshing of diverse uses, characterized by short distances, green and communicative. In other words: spaces full of urbanity and quality of life. But this requires new real estate and spatial concepts that are more urban than ever before and meet the changing needs and wishes of individual users and the urban society at large.

The 21st century – the century of cities – has brought an end to creating asset classes according to single functions such as office, residential and retail, a classification which has been in use since the post-war period. Monolithic, faceless shopping streets, deserted CBDs or dormitory towns no longer capture the lifestyle of a modern urban society. The focus of the modern city of the 21st century is no longer on motorized individual transport, but on people as social beings. This not only creates urban flair, it is also more ecological.

The urbanity and urban dynamics of a neighbourhood and of the individual property itself are therefore the key to sustainable cities that are worth living in for the long term. This requires short distances between living, working and leisure spaces. Urbanity, however, also requires exciting and varied premises that are inspired by the ideal of the European city and offer a diverse and dense mix of different forms of use and cultures in a compact space. At the same time, they should be places for spontaneous encounters, like the market halls and piazzas of the Mediterranean metropolises. 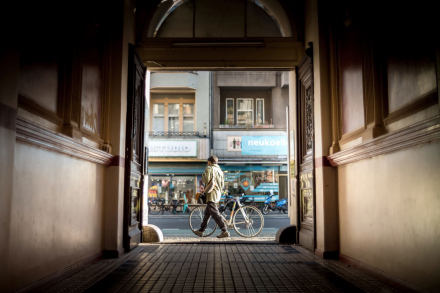 It is therefore evident: mixed-use properties and quarters will be the anchor of a liveable urban development because they embody precisely the lifestyle of urban communities. According to a study by the Zukunftsinstitut on the "Metropolitan Lifestyle", it is precisely the mix of diverse opportunities and flexibility that promises freedom and makes life in a metropolis so attractive for many.

Mixed-use concepts are therefore the future in metropolises: flexibly usable and changeable, yet also sustainable spaces that can be an office today, a cinema tomorrow and a boarding house the day after - or all at the same time in one building shell. All of this implemented in a sustainable and climate-neutral way. 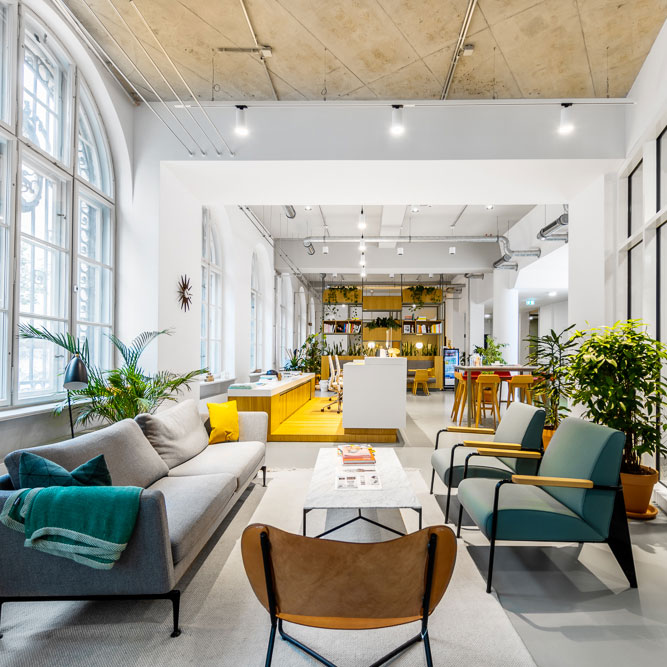 This is where we come in. Together with our investment partners we want to develop attractive, resilient properties that improve the way people live together and thus help tenants and residents to realize their life plans or business goals in the best possible way with the right properties. For example, with our Alte Post quarter development in Berlin-Neukölln: Located in one of the most exciting and thrilling neighbourhoods of the capital, it picks up on the diversity of its surroundings. We identified incredible urban potential in the premises here and unlocked it with a mixed-use approach. Whereas the area was previously closed off and felt a foreign body in the neighbourhood, it is now opening up to its surroundings and blending into the neighbourhood with its diverse mix of uses including modern and flexible office space, restaurants, residential, food retail as well as social uses. The refurbishment also provided us with a chance to pursue sustainable approaches. In the building adjacent to the historic post office building, for example, flats with a view over Berlin are being built in timber construction on top of micro-apartments for young professionals and students. 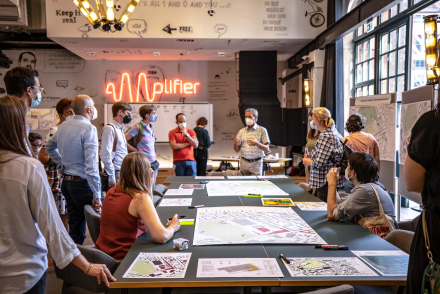 Dialogue with all stakeholders

However, these mixed-use developments should not only meet the requirements of tenants and investors. In order to remain attractive over time and radiate urbanity, it is essential they integrate into their urban context via their design and their types of use, accommodating the local needs of residents and local stakeholders. These external variables are key influencing factors for the success of a mixed-use development.

In our Quartier Am Humboldthain project, we have encouraged from the very beginning the broad participation of local stakeholders, ranging from politicians to tradespeople and residents. Within the framework of our innovative, forward-looking workshop process, we discuss and jointly work out what is to be built on the site. With these discussions, we want to initiate a discourse with everyone involved, gain new insights and work out together how the neighbourhood can be developed optimally. This may be an intense process, but we believe it is crucial for the success of the project. After all, we aim to create a lively and liveable neighbourhood that opens up to the surrounding quarter.

The demise of the monolithic asset class

The development towards mixed-use real estate will continue to accelerate in the coming years and change the face of our cities. It spells the end of the monolithic asset class that has dominated the real estate industry's thinking and strategies over the past decades.

For long-term investors with the right asset manager at their side, this opens up new opportunities. It is true that the initial planning effort for a mixed-use property is higher: in addition to space conversions and the clarification of official issues, a compatible and harmonious mix of uses has to be designed. But it pays off. A successful mixed-use implementation not only ensures a continuous and lasting revitalization and use of the space, but also a more stable rental cash flow. The property remains more attractive in the long term as it is more urban. Investors also benefit from additional risk diversification, as mixed-use quarters are more resilient to market fluctuations in individual asset classes. 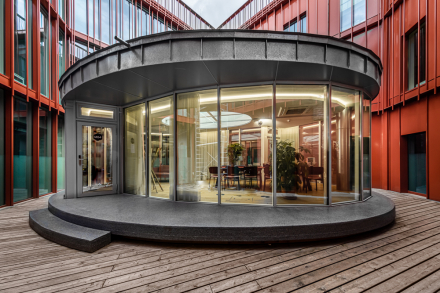 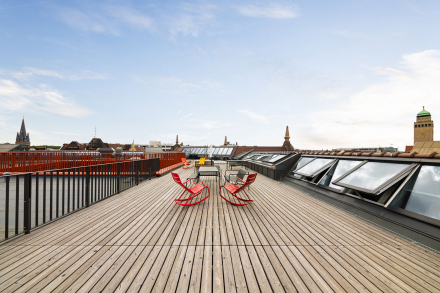 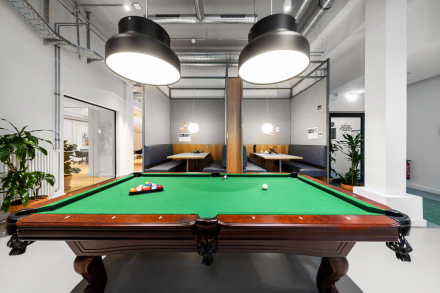 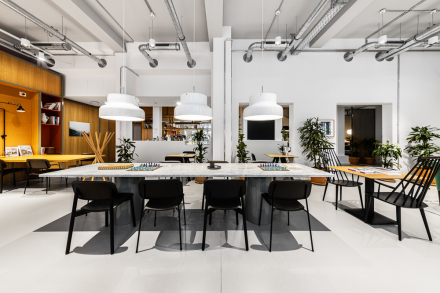